Public Beaches on Camano and Whidbey, and a Public oyster beach at Penn Cove

The below map is from http://www.wdfw.wa.gov/fish/shelfish/beachreg/map08.htm If you click and go to that Washington Dept Fisheries & Wildlife "map08", there are clickable links to/about all the yellow public beach areas.

I was surprised to find out last year, that there is a public beach at Penn Cove, where there are oysters at the beach, that are placed and grown there by the WDFW. The area is a couple of hundred yards west of the Captain Whidbey Inn.
Here's a link about the area http://www.wdfw.wa.gov/fish/shelfish/beachreg/b240150.shtml

Below are a couple of oystering pictures from when I and a couple of my older brothers boated to the area on April 28, 2006. 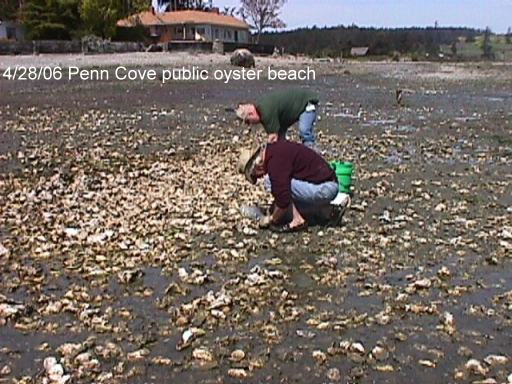 Below is a nifty Whidbey News Times article about a couple of the guys who seed some puget sound beaches with shellfish, including Penn Cove.

Jun 08 2005
Farming the beaches
By Jessie Stensland
Two men on a 50-foot boat, custom built for one purpose, travel up and down Puget Sound each year to do some farming on beaches.
Last month, the deck of The Jimmy was piled high with their seed. The chalky-white, empty oyster shells seemed lifeless as they shifted in the wind, sounding like dry bones, or crunching underfoot.
On closer inspection, one can see that each shell has a number of barnacle-like creatures attached. Each one is a baby oyster, or spat, which will grow into a completely-edible Pacific oyster in about two years if given the chance. Brady Blake, a biologist with Washington Department of Fish and Wildlife, has a great job. It's his responsibility to plant Puget Sound public beaches from Olympia up to the Canadian border with oyster, Manila clam and geoduck. It's a program that's been going on since 1988.
Blake works with Jim Hayes, a contractor with the department, who run Hood Canal Oyster Company and seeded beaches with shellfish for about 18 years.
"It's farming," Hayes said. "You either love it or you don't do it."
The two men motored into Penn Cove late one night with the last of a pile of spat-laden oyster shells. The pile, Blake said, contained about 50,000 spat. They have been seeding oyster beds on two different beaches in the cove for the last six or seven years. One beach is at the west end of Penn Cove, directly across from Madrona Massage. The other is near the mussel rafts. To get there, a person has to walk on the beach from Coupeville.
In the morning, Blake and Hayes head out on the high tide to the west end beach. Blake maneuvers the boat near shore, turning in circles, as Hayes hoses the shells off the deck with seawater.
It's noisy business, but much easier work than the old method raking the shells into the water.
"You can do it by hand for a period of time," Hayes said, "but as you get older, it doesn't work so hot."
Many private beach-owners plant their beaches with shellfish seed, which can be purchased from Taylor Shellfish Farms. The state buys oyster spat from Coast Seafood Hatchery. Blake said the oyster shells are dipped into giant tanks of brine that are infused with oyster larvae; the larvae attach to the shells.
The purpose of the program is simple: "We want to provide recreation opportunities for Pacific oysters outside of Hood Canal," Blake said. "We want to give the the public an opportunity to develop a taste for it."
In other words, collecting and eating oysters, and other shellfish, is simply fun. It's part of life in Puget Sound.
That's not to say harvesting oysters in Penn Cove is natural. Pacific oysters were introduced to Washington from Japan in 1902. They cannot sustain themselves in Puget Sound outside the warmer waters of the Hood Canal. The waters near Coupeville are too cool, Blake said, for the oysters to successfully reproduce.
They grow big and they even spawn, the oysters in Penn Cove have been milky lately, but the beds would probably die off if the men didn't periodically replant them.
Blake said he doesn't plant Manila clams or the giant geoduck on any Whidbey beaches because there's not a need. Clams do well on Whidbey beaches without his help.
This year, Blake planted nine beaches with oysters, though some years it's up to 27. He only seeds three to six beaches a year with clams. The geoduck program, the only planting of native shellfish' died off for a few years, but now it's back. Blake plants two beaches a year, he said, until he has eight to 10 beaches going. The giant clams are much more difficult to cultivate and take about five years to mature.
Back in 1990, Blake and now-retired biologist Al Batie pioneered a way to plant geoduck. With the help of volunteers, they stuck up to 2,000 foot-long PVC pipes into the beach and placed two or three tiny geoducks into each pipe, which was covered with mesh. In nine months, the clams were able to burrow into the sand and the volunteers pull the pipes out.
Unlike clams, adult oysters are primarily sedentary, which means shellfish hunters don't need to dig to find them. The Penn Cove beaches have many large oysters, Blake said, that can be gathered by anyone with a shellfish license. The beaches are open to oyster harvest year-round. The limit is 18, which must be at least 2.5 inches.
When harvesting, the oysters must be shucked on the beach. The shells should be at the same place and tide height where they where collected in order to give the spat a nice home.
After hosing off the last of the oyster shells into Penn Cove, the men aboard "The Jimmy" headed back to home to Hood Canal. They were done planting beaches for the year.
But Blake will be back to check on his beaches. With any luck, many of the little oysters will escape from starfish, crab and other predators to grow into large, fluted-shell bivalves that so many people crave raw, fried, baked, boiled or grilled.