Oysters grow great in our Camano Island waters, if protected from storms and predators.

Louie and Sam with oyster pots. 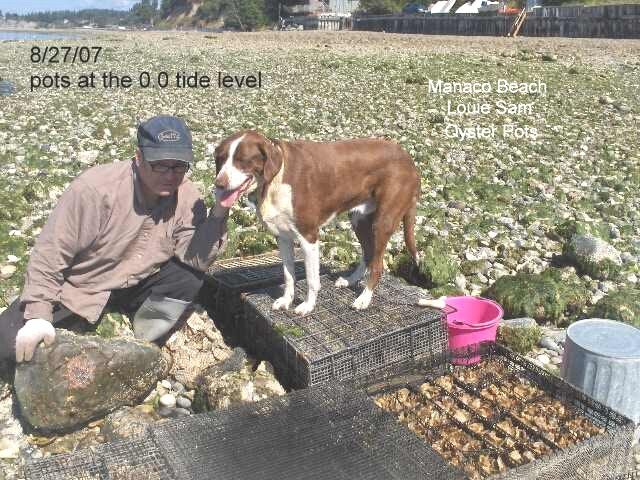 Below are pots I made for our manaco beach community club. These pots are at the 0.0 tide level. 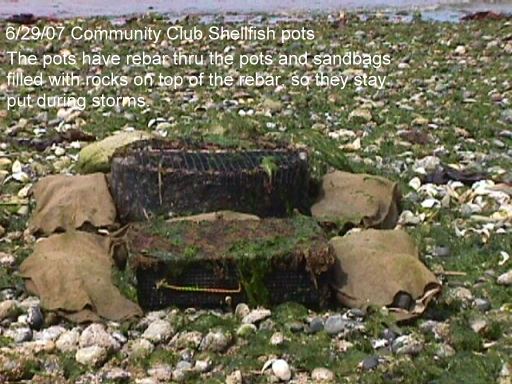 These are my pots at the 0.0 tide level. I placed them in a rock area that the oldtimers bulldozed rocks to. 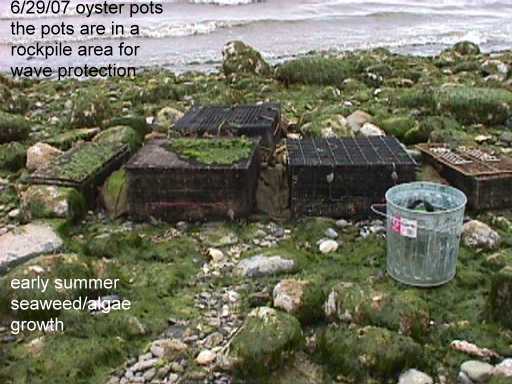 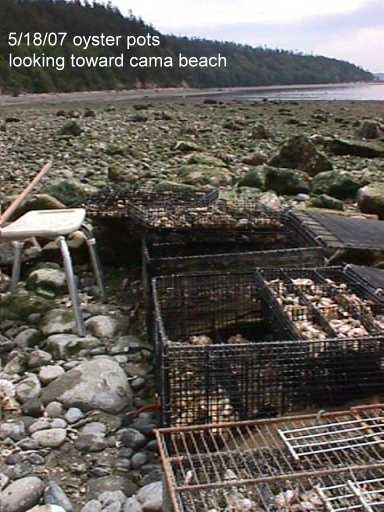 I've made small and big oyster pots. A big pot will hold more, but a small pot will survive storms better and hold plenty of oysters for appetizers once a week. 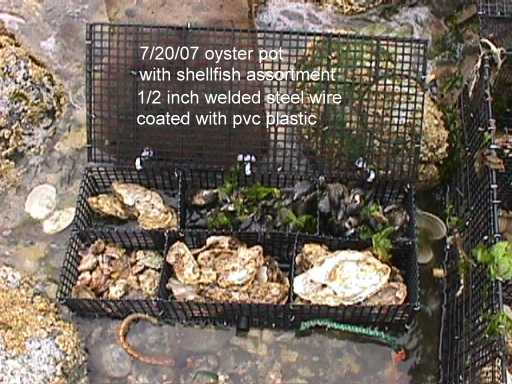 These triploid pacific oysters, were bought in late May 2007. Over 95% of the oysters I've bought have survived. 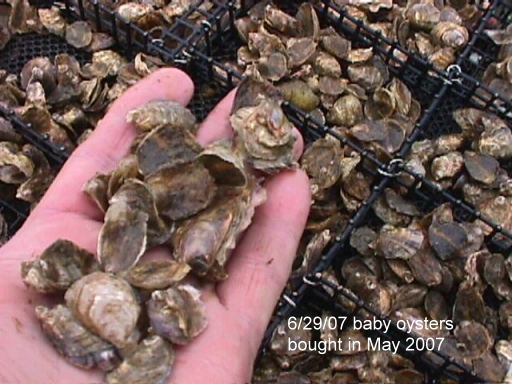 I like the oyster spat that's attached to a shell. Lots of future oysters. Spat on shells is how oysters naturally grow. These are artifically grown to produce more spat per shell. Some shells can have over 100 baby oysters on one shell. 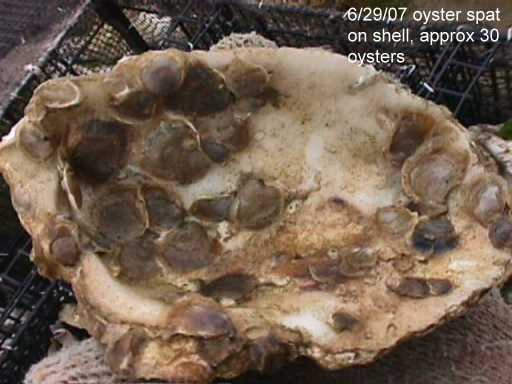 Without those little compartments, the waves push the oysters to one end of the pot. 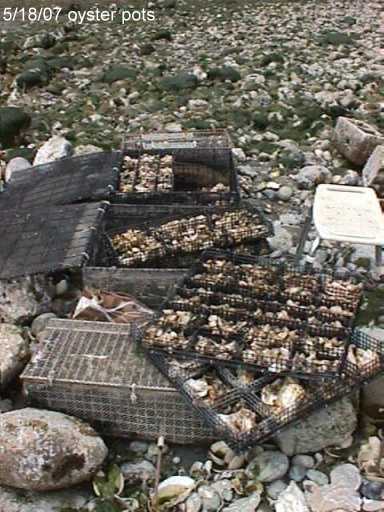 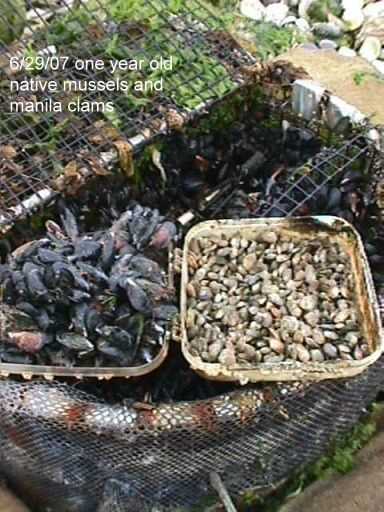 these 1 year old oysters are delicious and fast growing during the summer. 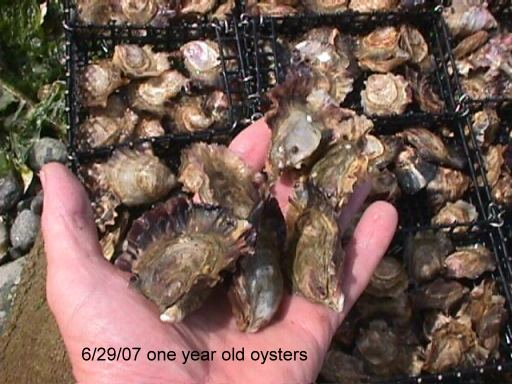 Below are some of my thoughts about oysters/shellfish and growing them in our Camano area..

What about beach rights? Around 80% of the camano beaches are privately owned.
washington state sold intertidal beach rights in the 1890's onward to 1970, originally so shellfish farmers could grow and own olympia oysters.

(The below information is from the 2007-8 washington state sportfishing regulations pamphlet.)
TIDELAND OWNERSHIP Most Puget Sound, Hood Canal, Grays Harbor and Willapa Bay beaches are privately owned. SHELLFISH and SEAWEED may not be taken from private beaches without the owner's or lessee's permission. Private tideland owners and lessees, and member of their immediate family (grandparents, parents, spouse, siblings, children, and grandchildren) are exempt from personal use daily limits when taking CLAMS, OYSTERS, AND MUSSELS harvisted for their own personal use from their own tidelands. daily limits apply for all other shellfish, all other people, and all other beaches. Everyone harvesting shellfish in excess of the daily limit from private beaches for presumed commercial purposes needs a shellfish certification from the Department of Health (see RCW 69.30.010(8)) (The above information is from the 2007-8 washington state sportfishing regulations pamphlet.)

Japanese (pacific) oysters are the most widely grown oyster in washington state. they need 68 degree water temperture to reproduce. numerous northwest bays and inlets can reach those tempertures, including hood canal areas, south sound olympia areas, and willapa bay. it's possible that there are some camano inlets/bays/coves that could reach 68 degrees like triangle bay within driftwood shores. our 55-60 degree waters are too cold for japanese oysters to reproduce. it's possible that olympia oysters could reproduce around camano, but historically they haven't. taylor shellfish farm, sells small quanitities of oysters and other shellfish, clams, http://www.taylorshellfishfarms.com Taylors website has an abundance of shellfish information.

kinds of oyster pots, for our camano waters, (and most of central and north puget sound), oysters need to be protected from storms (mainly), and predators. whatever kind of beach oyster container is used, it needs to be able to survive the waves and corrosive saltwater. crab pot materials work fine. i like pots better than bags, because it's easier to access the oysters. locks are possible, but plastic zip ties would be a good preventative. 500 oysters and 200 mussels don't take up much room, and the smaller the shellfish pot, the easier it is to carry it to the beach and protect it from waves. i make the pots out of http://www.riverdale.com/marine.shtml rivendales aquamesh 1/2 inch size, with stainless steel hog rings.

oysters are tough. i had 30-60 large oysters in a double netted crab pot last winter. the sharp edged oyster shells made a hole in the string nets during a december 2006 storm and the oysters and mussels got out. i found most of them within weeks, but some i found months later, up to a mile north of manaco. they had rolled that far during storms. the shells were worn smoother, but the oysters were still alive.

placement of oyster pots, anywhere from +5.0 to -3.0 will keep the oysters underwater for at least 12 hours a day. if the pots are placed behind rocks, the waves will be dissipated before they hit the pots/oysters. lower on the beach, more feeding time, but maybe more predators,

what about vandals and theives? the vandals and theives would have to be beach walkers, and they would have to be on the beach during the 1-6 hours a day when an oyster pot isn't under water, and during most of the fall winter and spring, the tide is low mainly after dark. also, what's a meth addict going to do with oysters? it could be possible to put a lock on an oyster pot lid.